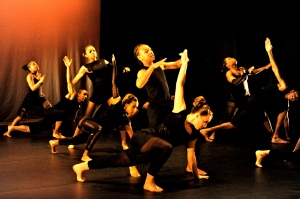 ACE Youth and their Group Leader, BBC Performing Arts Fund Fellow Iona Waite, have had a hectic but rewarding time this February. They’ve been rehearsing twice a week and during half-term for the regional U.Dance platform which celebrates the best of youth dance in the West Midlands, held at DanceXchange last Sunday 19th February. They performed a new piece entitled ‘Trespassing’, with choreography from Tiia Ourila.

Iona Waite said of the performance, “I was so proud. I had tears in my eyes when they were on stage.”

We are now waiting to find out if ACE Youth have been given a place to perform at the international U.Dance flagship event, which will showcase the best in youth dance from across the U.K., to be held at the Southbank Centre, London, this coming July – cross your fingers for us!

From 16th – 18th February ACE Youth travelled down to Bournemouth to Pavilion Dance and took part in a trilateral residency with Evolve Youth Dance and Shoreditch Youth Dance, to share practice and ideas.  Kirsty Biggenden, Leader of Evolve, praised all the young people involved:

“ To watch our youth dance company members be inspired by other young people and develop their confidence dramatically in such a short space of time was fantastic. It was an honour to work with a group of such talented, driven and creative young people” (Kirsty Biggenden, Leader of Evolve)

Bleue, Aaron and Lyeisha of ACE Youth will be using this exchange as the starting point for their Arts Award and here Bleue reports back on all this activity:

“My time in Bournemouth as a part of ACE Youth was an enjoyable experience. We met with Evolve and Shoreditch Youth Dance, meeting with these dance groups enlightened me to the other styles of dance that youth are doing around the country. We took part in two days of activity where we did various exercises designed by the other groups; this was a fun way to get to know them and learn various ways in which they find inspiration for their dance pieces. On the first day the main activity was the beach trail, where in mixed groups we explored various locations of the beach and took inspiration from the surroundings or theme that was chosen for that location in order to create a site- specific film. The idea was great, and I know all groups would have loved more time to elaborate on our choreography.

Our second day in Bournemouth was fully energetic as we had African Caribbean Dance lead by our very own Iona. This was a great opportunity to show and teach the other groups our individual style. We later used inspiration from the beach trail for creative and choreographic exercises allowing us individually to show our own style. Overall Bournemouth was a successful exchange where we gained knowledge and met some fantastic people.

Following our dance exchange from Bournemouth was U.Dance at the Patrick Centre. We took part in a street dance class and a creative class and had a session learning of various paths of dance. The events of the day were enjoyable and entertaining. We got to watch the other performers dance routines in dress run, we saw the various styles, techniques and motifs used to was inspiring.

Being a part of ACE Youth has already taken me to new places and I’m excited to see how the rest of the year maps out.”

We’re back in the studio and we have another exc

There are only a few tickets left for our African

Don't forget to book your space for our African Da