I am Kajza. I’m from Sweden and moved to Birmingham just two months ago to join ACE. I graduated from NSCD in 2006 and have since freelanced around Europe and North- and Central America, working and performing with different dance companies and collectives.

Since joining ACE, time has passed in the fast lane, and now all of a sudden even the Premiere has come and gone! The last few days leading up to THE DAY were busy, anxious, awesome, scary, hectic and really exciting all at once. We made some (well, loads) of last minute choreographic changes, had our final costume fittings, dyed our underwear in tea (a nice but unsuccessful attempt at creating a skin colour tone), packed bags of fruits, nuts, lucozade, Voltarol, plasters, tiger balm.. We were ready to go.

We arrived in Leeds late on Thursday night and got out of the tour van oozing of Caribbean take-away food, and checked in at the Travel lodge Hotel. On Friday morning we began the long, dark procedure of tech-ing the piece; hours upon hours of work to make sure that all the lights, spacing and timing were right (and inevitably falling over in the wings as you hear the voice “black ooouuut” just a second too late..).

On Saturday we got up early after a sleep full of dance steps, cyborg music and 5-6-7-8 whirling through our heads. More tech-ing, rehearsals and a dress-run was on the schedule before the show. A bit later on, a bunch of sweaty ACE scarecrows appeared – the tattered costumes had drastically failed the first test drive.. but a moment of panic was swept away as our own super seamstress Claire saved the day, patching us back up 45 minutes before the show started!

A big chicken dinner, lots of make-up, hair spray, stretches, Article
19 interview and nervous shakes later the adrenaline kicked in. The buzz from the audience gradually went quiet. I took a deep breath, transformed myself into a human cyborg and stepped out into the cold sub-zero environment of ICE.

72 minutes later the claps and cheers wrapped the full experience up in to one very rememberable bundle of joy and relief. We did it!! 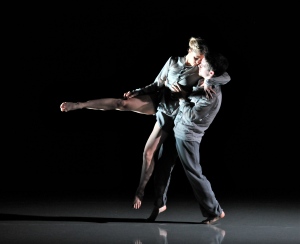 We’re back in the studio and we have another exc

There are only a few tickets left for our African